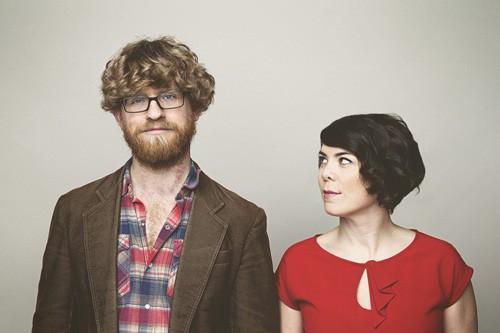 Through their rich but rustic sound, Toronto roots-rock outfit The Young Novelists deliver a dose of honesty in audible form.

made us strangers, their upcoming sophomore effort, showcases a significant sonic progression for the band. Ripe with raw but elegant instrumentation and stacked multi-layered harmonies, their pure take on folk-tinged rock translates equally well from the stereo or stage.

What first began as a stack of songs that frontman Graydon James had amassed behind the drum kit in various bands during his university years eventually became a collection of recordings performed by the six-piece band, Graydon James & The Young Novelists. But over time, as James’ wife Laura Spink became integral to the creative process and the band began performing and touring as a duo, the more succinct banner of The Young Novelists was born.

Since dropping their debut EP, a small town eulogy, in 2011, they’ve made impressive strides up the industry incline. Their catalog also includes a live collection and their 2012 debut LP, in the year you were born, which cemented their status as an act to watch. Now, with made us strangers, The Young Novelists are set to make their most impactful musical statement to date.

“We were looking to inject a bit of excitement and edginess into it this time around,” James says, “but also wanted the recordings to be more organic and true.” For that, The Young Novelists enlisted the aid of producer Carlin Nicholson (Jason Collett, The Golden Dogs), also a member of Toronto rock outfit Zeus. Together, with a minimalist approach to recording – no pitch correction, no click tracks, and some cuts captured entirely live off the floor – they added some grit to The Young Novelists’ sonic grace.

Cuts like “brothers in the garage” showcase the fruit of that union – rooted in folk with the band’s captivating and catchy vocal phrasing but boosted by slightly overdriven guitar and a triumphantly authentic chorus. Similarly, “come back to me” is an upbeat earworm that showcases their breadth of influence. Conversely, more sombre offerings like “always make the mistake” – this one anchored by Spink’s vocals – are delicate but alluring.

“This record hinges on interpersonal relationships,” James explains of made us strangers’ underlying lyrical theme, which includes both traditional and non-traditional ones – from brothers in a band to a torrid love triangle to a new father missing the sound of his son’s voice when they’re apart.

As a published author with one novel – The Mall of Small Frustrations – to his name and two others in the works, James’ words carry a weight and depth that demand repeat listens. The hope, he says, is having a listener connect with the sentiment he explores, if not the specific subjects. “As personal as the songs are,” he offers, “I hope they’re connecting to other people in a way that goes beyond the situations I was writing about.”

That connection is perhaps most intense from the stage. From major festivals like Mariposa and CMW to iconic theatres like the Neptune in Halifax to trendsetting hotbeds like Toronto’s Horseshoe Tavern, The Young Novelists’ show is as engaging as it is endearing and has earned them slots alongside the likes of Cuff the Duke and The Strumbellas.

The band will have many more opportunities to take to the road in the coming months. “It’s going to be a busy year,” James says, but not with the slightest hint of unease; instead, it’s a shred of excitement that belies his modest demeanor.

Honesty and transparency. They’re at the very core of made us strangers, from the lyrics to the music to the way it was recorded, and that’s sure to foster closer connections between The Young Novelists and their current and future followers.