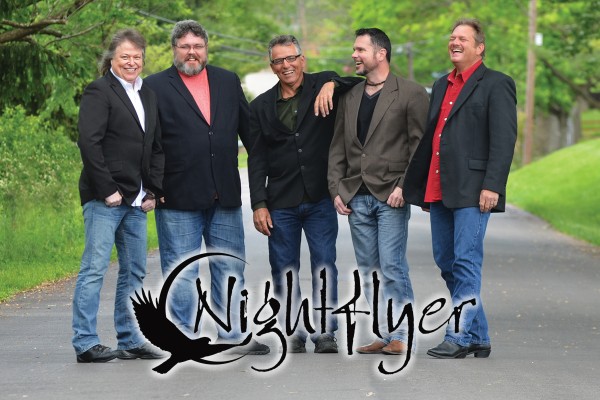 Nightflyer, named in honor of Tony Rice’s song and album of the same name, consists of a group of talented professionals, hailing from Southwestern Ohio. The band is a perfect blend of contemporary bluegrass with strong traditional roots, a little gospel and just a touch of the blues thrown in – all culminating in a distinctive Nightflyer sound wrapped up in an entertaining show that appeals to all types of bluegrass fans.

The band’s lead singer and guitarist Richard Propps, consistently receives rave reviews on his powerful and often awe-inspiring vocals (polished by years on the Southern Gospel circuit) and excellent guitar playing. Superb mandolinist and occasional lead vocalist Rick Hayes, spent four years touring nationally with the Gibson Brothers, and received a coveted Highlight Review from Bluegrass Unlimited on his solo CD, “Fly By Night.” Tony Kakaris is the rock solid heartbeat of Nightflyer on the standup bass, lending baritone as well as lead vocals to the group. Tim Jackson adds spice to the mix with his fiery dobro performances, and an occasional baritone and lead as well. Rounding out the sound is Ronnie Stewart, contributing killer banjo, and sweet lyrical tenor and lead vocals. Each individual is outstanding on his own, but this is truly a band that is greater than the sum of its parts.

Keep your eyes and ears open for this band – you won’t want to miss them when they hit your town.