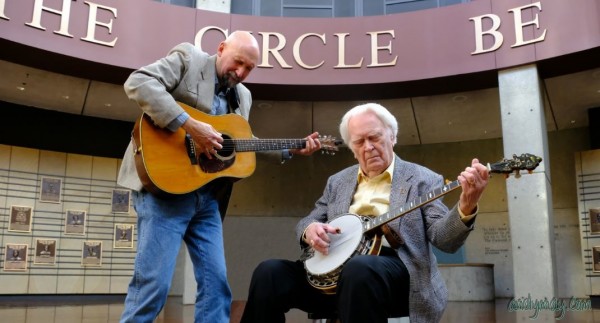 Throughout a career spanning 70 years in the music business, Curtis McPeake has played stints with some of the biggest names in the history of bluegrass music. Not only was he one of Bill Monroe’s “Blue Grass Boys,” recording 18 classic cuts with Monroe in the early ‘60’s, he was a stand-in for Earl Scruggs in Flatt & Scruggs on many occasions, and he toured with Danny Davis and the Nashville Brass. McPeake was also part of the Opry staff band for eight years and a Nashville session player, appearing on hundreds of recordings.

Guitarist, vocalist, and producer on this project, Andy May started performing seriously in his teens, immersed in and part of the ‘60s’ folk and old-time music revival in New York’s Greenwich Village. During that time, he performed at Carnegie Hall and made a name for himself as an up-and-coming musician and songwriter. Moving to New England in 1970, and subsequently to Colorado and then to Nashville, May’s reputation has grown to include his extensive work as a producer and an educator. His credentials include a Grand Championship on guitar from Union Grove, NC, (1967) and an IBMA Award (2008) garnered by Swift River Music, the record label and production company that he started, owns, and runs.