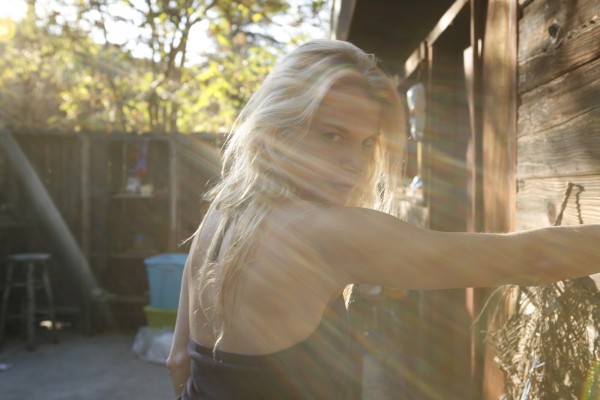 As the lyric from her song “Shotgun” implies, singer-songwriter Amilia K Spicer has a thing for wide-open spaces and exotic places. Even her record label name, Free Range, reflects her vagabond spirit—which has carried her from the rolling green hills of her native Pennsylvania, to the hill country of central Texas, and even the mountain monasteries of Nepal. She lives in Los Angeles and Austin, but she might tell you she feels most rooted when she’s heading toward a distant horizon, guided by the sky. Her label’s motto? “Don’t fence me in.”

The songs on her new album, Wow and Flutter, capture the vastness of those horizons with a cinematic quality, somehow sweeping us into the panorama as we listen. It should surprise no one that she pursued a career in film before music became her muse.

When Spicer answered music’s call, she was first discovered at a Los Angeles club. That led to a rare main stage Kerrville Folk Festival debut, three Kennedy Center performances, song placements in several high-profile TV productions (Party of Five, Dawson’s Creek), and more. Spicer’s first two releases, Like an Engine and Seamless were released to critical acclaim, with New Texas Magazine calling Spicer “A formidable talent.” Spicer’s music has also earned comparisons to that of Lucinda Williams, Emmylou Harris, and Lanois. During the writing process for Wow and Flutter, Spicer took time to work on several other projects. Among these, she has been lauded for her contributions to Cinnamon Girl:  Women Artists Cover Neil Young and A Case for Case:  A Peter Case Tribute with John Prine. She also appeared on the 2009 Safety Harbor Kids Holiday Collection, alongside Jackson Browne, Sheila E, and Paul Barrere. Spicer has enjoyed other collaborations as well, most notably appearing on albums by John Gorka and the final Rounder release from the late Bill Morrissey.

Spicer describes her folk-Americana style as red-dirt noir, evoking majestic vistas—and shadowy mysteries. Crafted on piano and more recently, guitar, her richly textured songs are sung in a honeyed alto that’s equal parts earthy and airy. Her sound is like glass: spun from sand and fire into something smooth and clear. And sometimes beautifully etched—with acid.  The album’s title, a reference to pitch changes caused by imperfections in analog audio, was chosen in part because the sounds so sensual. “Wow and flutter reminds me of wax and wane, ebb and flow,” Spicer says. “Or something opening and closing, like a heart.”  Moon, tide and heart fluctuations—and other natural-world phenomena—are part of Wow and Flutter’s essence. Its songs carry titles such as “Lightning,” “Windchill” and “Wild Horses”; they mention hurricanes, open flames and stones polished in the rain. A hoot owl calls at the start of “Shotgun,” which turns Native American- and African-influenced vocal undulations and delicate slide guitar into a truly hypnotic reverie. There’s an intimate sensuality, too, but it’s as if she’s dancing behind a veil, letting her music reveal what it may. However, in “Fill Me Up,” the western-tinged first track, when she sings the line, Shenandoah’s got secrets so deep, we can infer she’s talking about more than a mountain. In the soaring “What I’m Saying,” she declares her intent to find her purpose and place in the world. “I want to be a force to be reckoned with,” Spicer asserts. “I want to cause a beautiful commotion.“